2020 was a historic year filled with sorrow and darkness. The COVID-19 pandemic led to the loss of millions of human lives worldwide and revealed the gaping holes in the American healthcare system. For many people, it was a period of deep, psychological trauma that had never been acknowledged before and they became despondent to the tragedy that was happening all around them.

In the past year, artist Xiaoze Xie has been developing a new body of work that grapples with the loss, grief, and psychological trauma engendered by the ongoing global pandemic. His new monumental, multi-panel painting, Panorama of Eternal Night (2021), combines media images of the global pandemic with famous works of art history. Immersed in a grisaille-like effect, images of healthcare workers in the ominous white suits we have become familiar with are shown in action fighting against the pandemic: a pair of workers cart a sick patient on oxygen, a group of healthcare workers carry a coffin across a field of white beds on another panel, and another group is hugging each other in solidarity. In the distance are also more bleak scenes of the pandemic and climate change: a melting glacier, a New York City skyline immersed in darkness and the haunting red glow of the Empire State Building needle, and makeshift piles of crematory fires from COVID burials in India. Juxtaposed throughout the visual field are re-configured scenes from Dante’s Inferno illustrated by Gustave Doré; a Tang Dynasty mural from the Dunhuang Caves, Disciples of Buddha in Mourning; Giotto’s The Lamentation of Christ; and Francisco Goya’s The Sleep of Reason Produces Monsters.

Looking for art-historical references, Xie has found some of the most powerful expressions of humanity in religious art, and discovered parallels and formal affinities between art of the East and West. He is particularly inspired by the complexity, intensity and drama in the portrayal of human suffering in Dante’s Divine Comedy, which he read over Zoom with his son Victor who was stranded at university during lockdown. He brings the same pathos and gravitas from Dante’s epic narrative to his subject matter through collage combining history and the present, the real with the imaginary. The sheer size of the painting and the panoramic perspective encompasses the viewer with historical and contemporary images of loss and suffering and demands the viewer to grapple with some very difficult emotions. The wailing disciples of Buddha on the far left panel capture the enormous loss of a loved one to the deadly virus. The second panel from the right shows a scene from Doré’s illustration of Dante’s Inferno in which Dante and Virgil witness a sinner being prodded like a piece of meat by demons; its composition echoes that of the foreground scene of medical workers hugging each other. A 14th century depiction of the burial of plague victims in Belgium on the far upper right panel hovers eerily near the figures in white suits carrying a coffin of a COVID victim. The final panel shows Mary cradling Jesus’ lifeless body while the foreground shows its contemporary counterpart of a doctor hovered over a sick patient administering oxygen; the hands of Mary and the doctor exhibit a moment of tenderness and resilience as they touch the lying figures, especially when COVID has made touch lethal.

In the vitrines are Xie’s sketches done in brush and ink on rice paper that show his careful process in composing his painting. A series of ink and brush paintings depict more hands at work holding syringes and cotton swabs, and moving scenes of figures and hands embracing each other through plastic barriers, as well as scenes of mourning and burial of the dead from COVID, often juxtaposed with images from art history. The long, continuous scroll format mimics the scrolls of Buddhist texts and paintings that stitch together panels of images and texts of Buddhist cosmology and teachings; this is a result of the artist’s residency at the Dunhuang Academy where he spent time at the famous Mogao caves, a UNESCO World Heritage Site full of Buddhist murals and hundreds of grottoes. For his gallery exhibition, he has brought back the scroll format to illustrate a diaristic response to what is happening today and restore history back to life.

Since the mid-1990s, Xiaoze Xie has periodically created ambitious epic works to address difficult subjects, from the heart-breaking history of student movements in China throughout the 20th century, to the burning of books by the Nazis, the humanitarian crisis during the Iraq War, and the history of censorship in China. The current body of work in this exhibition is the continuation of the artist’s exploration of history painting and its simultaneous cohesion and fragmentation of time and space. It also tackles the trauma of the pandemic in powerful and innovative ways through the combination of historical and modern styles and vocabulary. Xie grew up in China during the Cultural Revolution and lived through the social and cultural changes sweeping the country, including as a student protestor of the 1989 Tiananmen Pro-Democracy Movement. He moved to the US in 1992 to pursue an MFA at the University of North Texas and has exhibited throughout the US and internationally. He is the Paul L. & Phyllis Wattis Professor of Art at Stanford University. 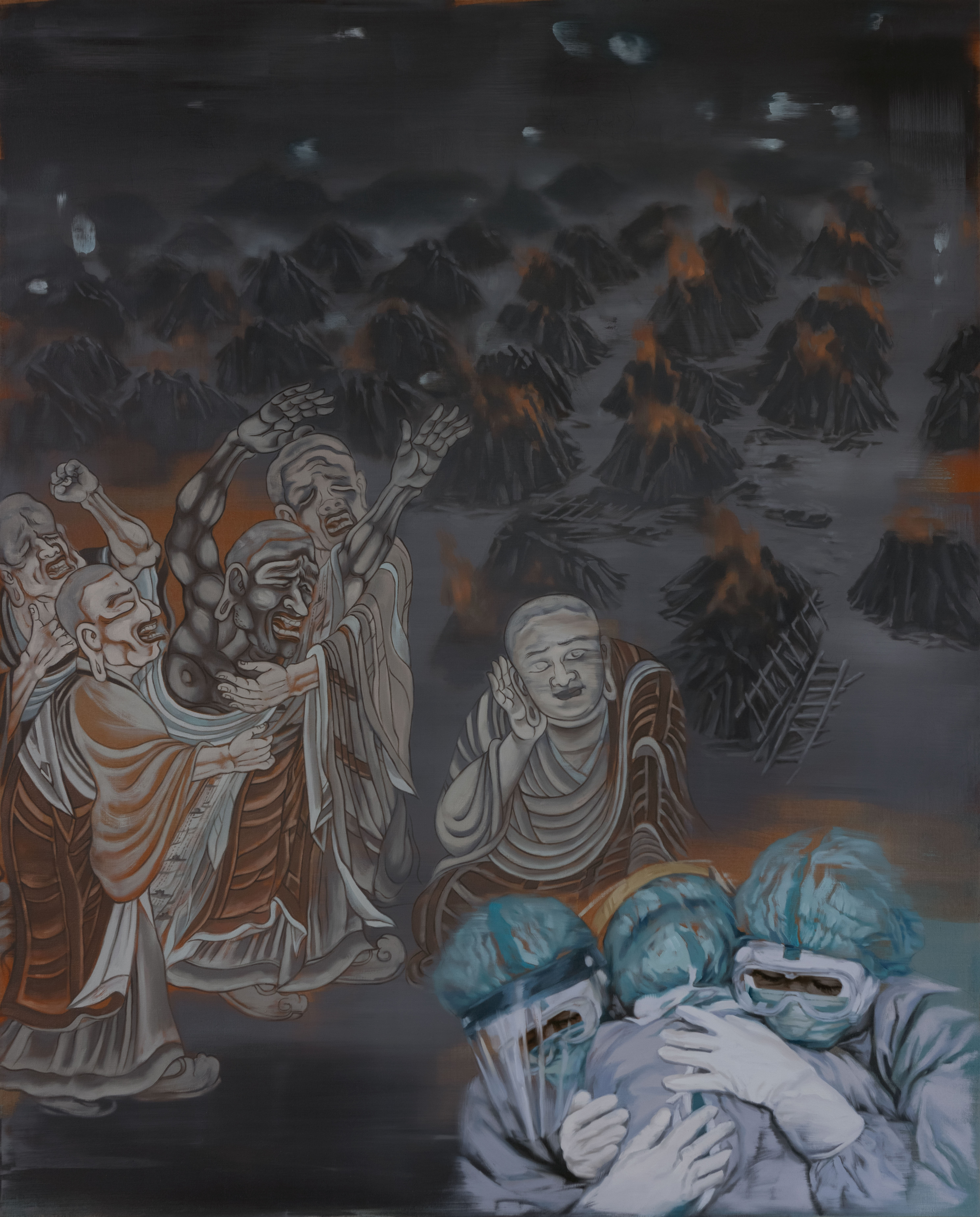 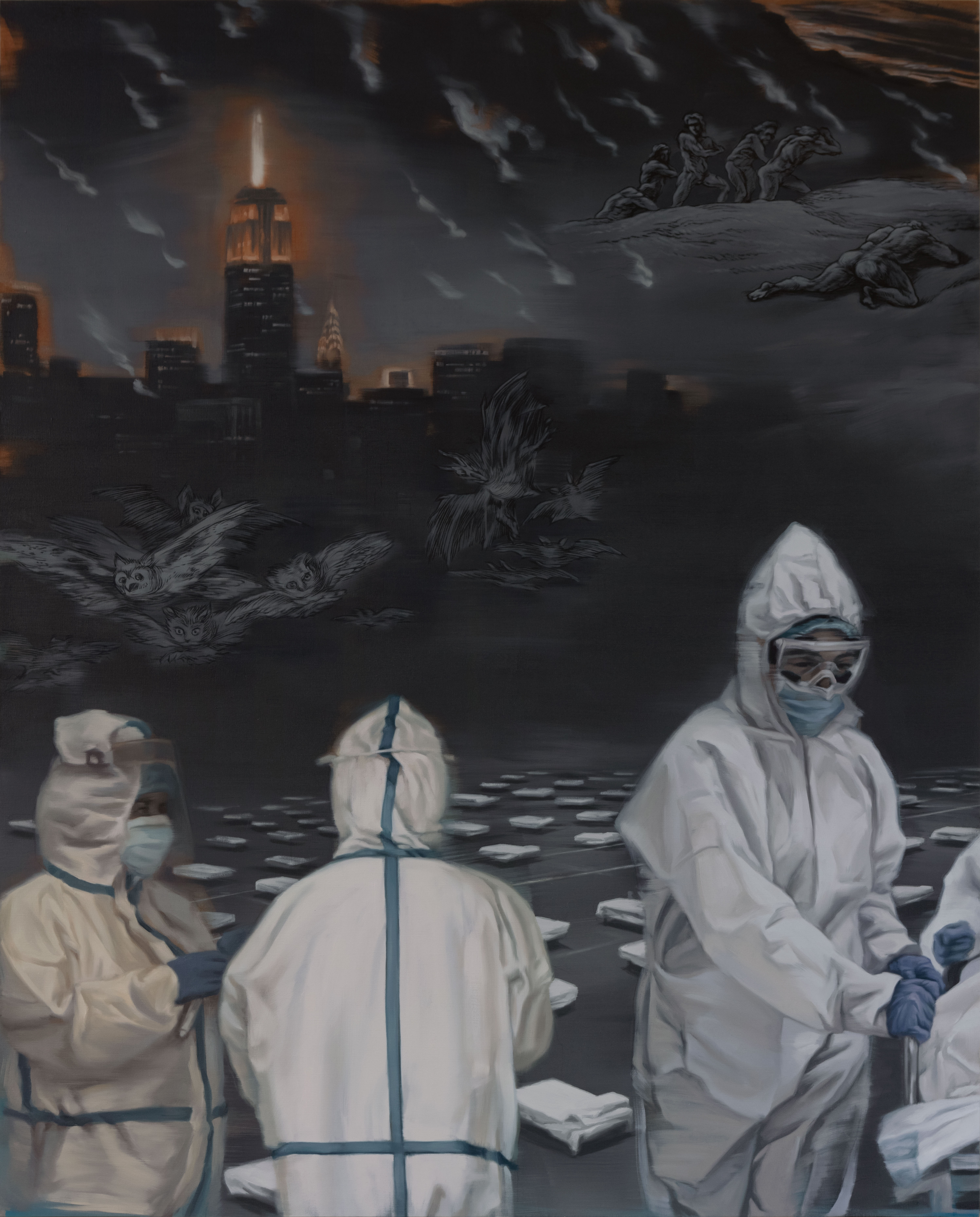 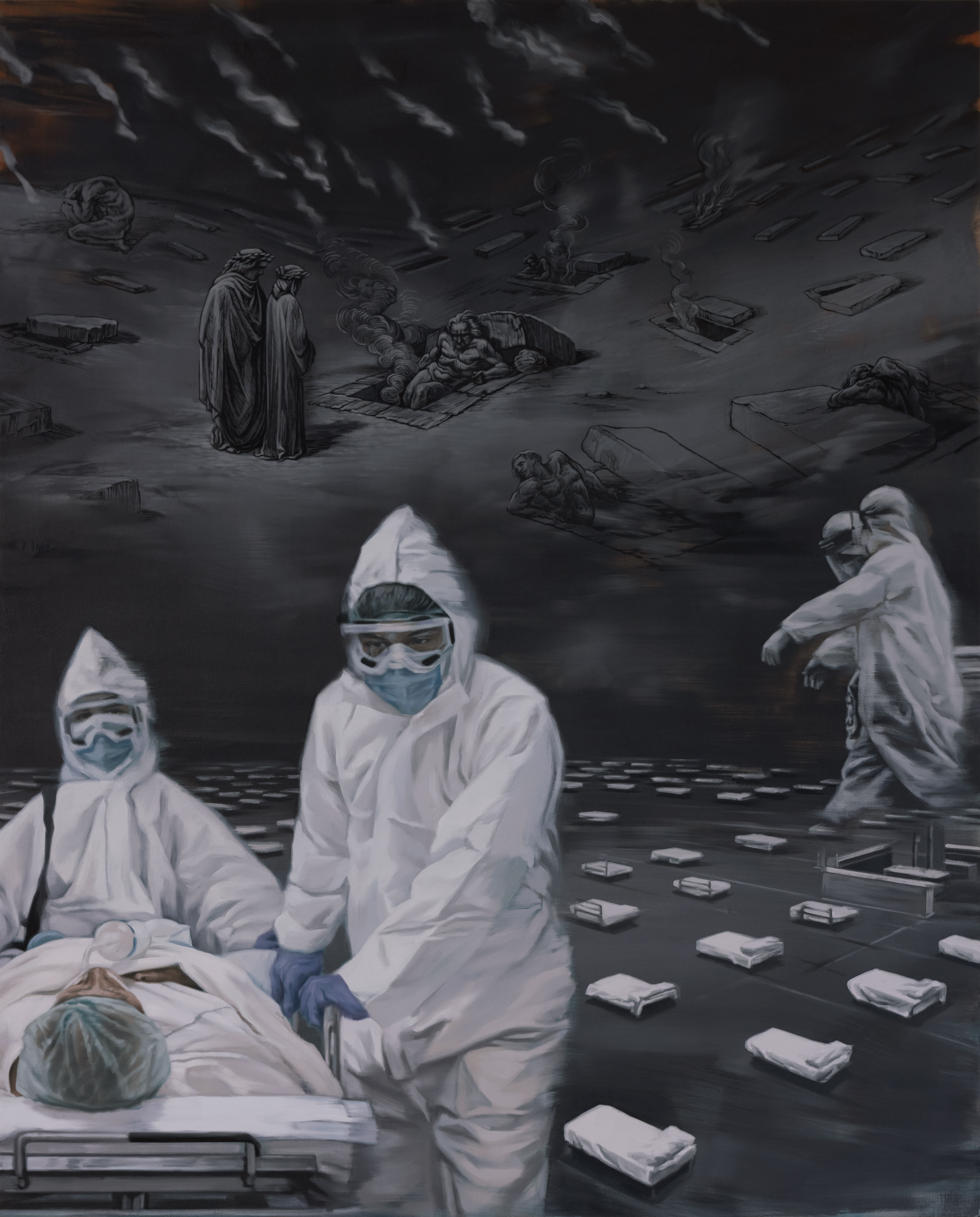 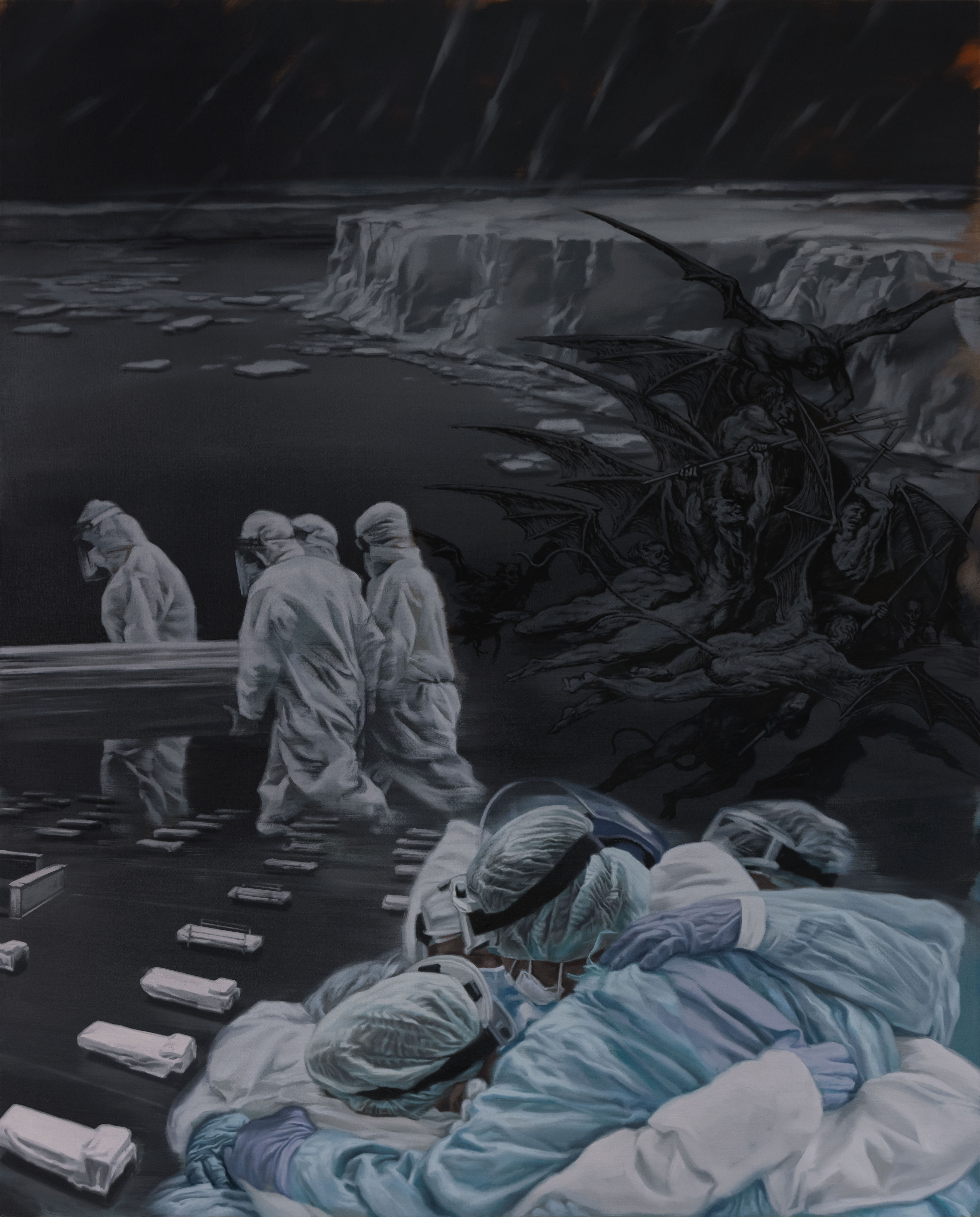 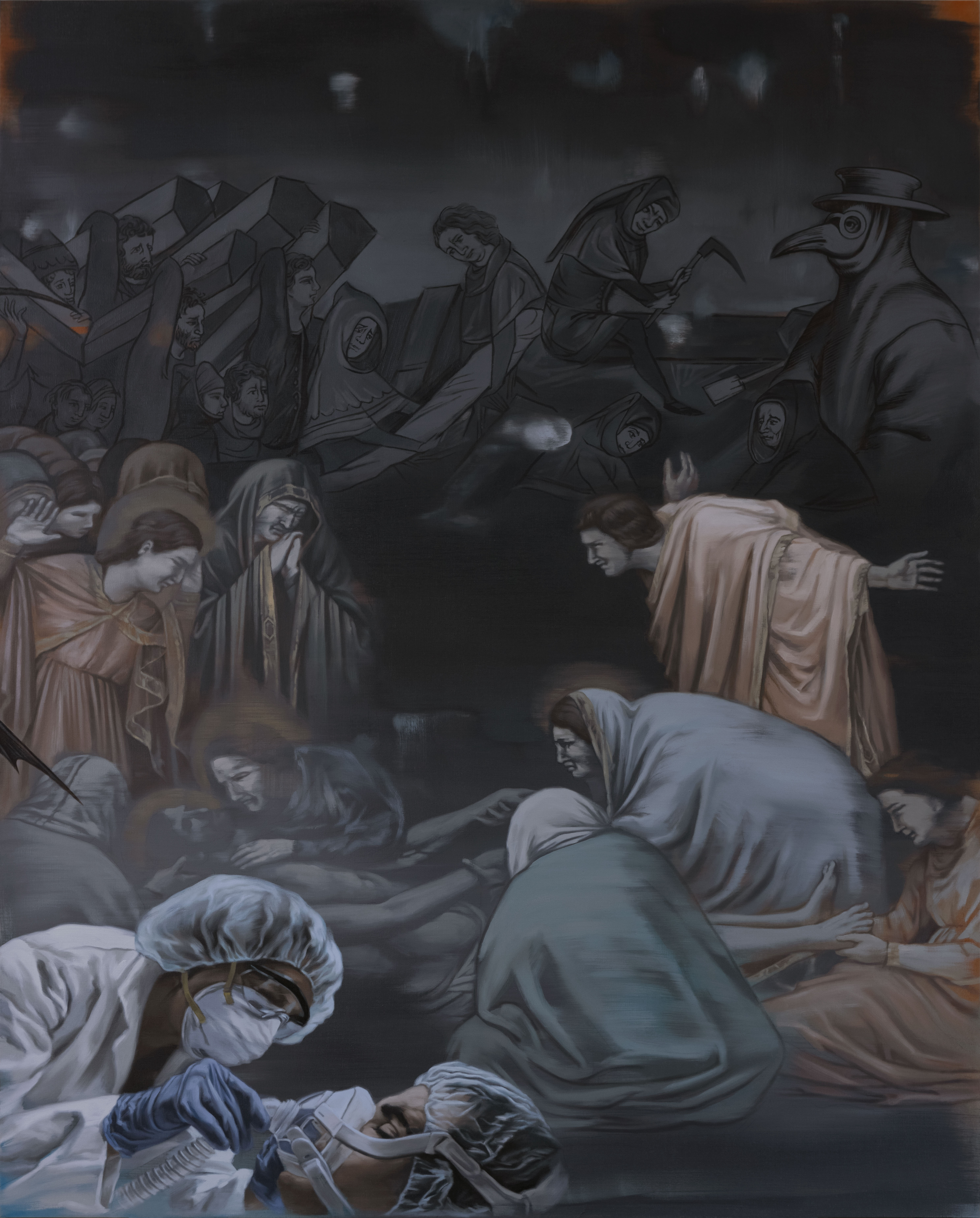