The concept of Contested Territories is as old as time. Geographic boundaries are often contested in scenarios of colonization and decolonization. Comeuppance is a word that comes to mind. Injustices, missed opportunities, and state violence continue to divide us. Contemporary artists respond to these heart-wrenching divisions as artists have in centuries past. Art can sometimes portals of recognition to the positions we occupy within social structures. Exhibitions with the words “contested territories” in the title have become increasingly prevalent, engendering a genre that adapts to specific locales to take part in processes of social reckoning. Miguel Amado curated such an exhibition at the Dorsky gallery in NY in 2012, more recently in 2021 a similar titled show on An-My lē’s work at the Carnegie Museum of Art etc. San Francisco never shies away from such catharses. This summer exhibition engages artists working on rearranging familiar social and cultural iconographies. As an artist operating as curator for this exhibition, I ask: What is art doing now in this conflicted point in history? Do these artists tell us something about ourselves while overlaying enigmatic nuances and surprising juxtapositions?

These six artists: Katie Dorame, Leila Weefur, Josef Jacques, Joyce Burstein, Yee Jan Bao, Wendy Liang, and Kyung Lee have for the most part been working on the subject of contesting territories have for many years in painting, photography, drawing, and film/video. They excavate social structures such as racism, incarceration, patriotism, identity, glamour, homelessness and violence. They use the tools of beauty, humor, and seductive formal qualities to undermine inequity and its canonized tentacles. A few appropriate revered images, such as Dorame’s lens on Hollywood westerns and pirate movies, Weefur’s work repositions the genre of Horror and religion to produce a metaphoric image of a sacred meal and the concretizing image of the blackberry from historical literature, and music to achieve another meaning. Others address issues head on like Kyung Lee’s We Are Here video on the crisis of homelessness in Oakland, California, as Josef Jacques presents layered photography of concentration camps and prisons in California history and landscape; Bao legacy as a unique and prolific painter of freighters in the bay, incidents of violence, and the human condition, Joyce Burstein extricates patriotism in her twenty year-old on-going epic artwork: “The Night Sky” shredding American flags once discarded as rags and presents the viewer with an existential experience of the time and the metaphor of the heavens. Wendy Liang, is realist painter who has taken a more pointed social view of Asian-ness, Covid, and violence.

Katie Dorame, featured here, presents a painting ”Stow Away Voyage, Graham, Irene, Wes, and the Rest” challenges the stereotypes of protagonist, victim, and villain in Hollywood historical fiction by place Native Americans in unusual roles. As a Native American painter, she has feely examined narratives that undo the colonial reality and flip power dynamics on its head. There is a kind of dark humor in her Pirates and Sea Ghouls series as she depicts Native American actors: Irene Bedard, Wes Studi, and Tantoo Cardinal in a rearranged pirate movie storyline. She uses masks to poke at gender expectations and cultural associations that form a painted theatre that redefines Native American pop-culture.

Leila Weefur is an artist, writer, and curator that is having a tremulous impact on Bay Area art worlds for their groundbreaking work and curatorial point of view. Weefur steers our culture to excavate power dynamics and systems of belonging that have for far too long been dominated by the same people. Their video, “Blackberry Pastorale: Symphony No.1” is a mesmerizing encounter of a group of people eating and smashing blackberries on their faces and hands with a stunning piece of classical music, “Fantastie Negre” by Florence Beatrice Price. This setting is akin to both a mock battle scene and a sacred meal with the iconography of the blackberry signifying race with both black and white people smattering the berry in such a way that it reminds the viewer of sacraficial blood. Weefur has been pivoting around the ideas horror and beauty in this series and their work takes a position akin with other filmmakers’ work  such as Jordan Peele. This era also begets a fluidity between the world of film and television and the fine art arena.

Josef Jacques is a photographer in Oakland presents carefully layered photographs that examine nature, and issues of incarceration as he presents prisons, detention centers, and animals up against a fence. He layers archival images of Japanese populations who lived in California detention centers because of the United States, executive order 9066. This 1940s presidential order led to thousands of incarcerated people and  was crafted in an era much like our current period of suspicion and conflict and sent thousands of Japanese Americans to live inside concentration camps. Jacques reminds us of our 21st century American border also highly fraught demonstrating that our government has sent thousands of Latin American migrants including children to live in these parallel camps.  Jacques has traveled for years into the American landscape presenting images of nature that implicate the position of human control. They are beautiful and terrible.

Joyce Burstein is a New York based installation artist, ( SFAI alumni) who has been diligently cutting apart the stars from American flags as she is able to find these floating through what vintage clothing experts call “rag houses.” As a conceptual artist and sculptor, Burstein is deeply committed to textiles, she has sewn hundreds of flags into what she calls “The Flag of the Night Sky” which is in essence a monumental art work that has been installed in multiple ways around the world. I participated in unfurling this enormous work over twenty years ago from UC Berkeley’s Campanile with the help of brave art practice students willing to hustle it up and out the opening of the bell tower. This artwork is at once the heavens which liberates it from its patriotic confines and is especially potent when draping giant bronze statues of colonial triumph. The beauty of its physicality is its ability to capture a multi-layered set of meanings as it flexes presentation into unlimited forms. Burstein will display a portion of her archive of photo documentation of the life of “The Night Sky” and she will again install this project in Minnesota projects with also the ball of the red stripes, as another reimagining the American icon. What is an American identity? Can patriotism be repurposed, recycled, and reinvented?

Yee Jan Bao was a beloved painter who passed away in 2014. He has born in Shanghai but spent most of his early life in Uruguay. Bao was a prolific painter whose mystical works were exhibited nationally in galleries and museums. Bao’s work was unique, spare, and dreamlike as he recombined American identities, icons, violence, and pop culture. The images are small awash in painterly fields of loose color. His imagery reminds me of what Ingmar Bergman’s film defines as “Cries and whispers.” Sometimes there are figures fallen from violence and what comes to mind is the Anti-Asian violence awash in contemporary culture. He also has images of freighters that he painted of Oakland’s port floating solo in an ominous sea, we can read them with the knowledge that one tank of bunker fuel is equivalent to forty million cars. There is always a dystopic and lush edge but touched with an expert and light hand.

Kyung Lee is a filmmaker based in Oakland, who grew up Korean in Japan having experienced a contested transcultural dynamic first hand. She lives near an enormous homeless encampment adjacent to home depot in east Oakland, where she for months had a practice of passing out sandwiches. Eventually her own living space became insecure from her development hungry landlord all of which led her to make a film she is in progress with: We Are Here. Lee has a version of the project that is tailored for the gallery experience as well, having begun to integrate animation in her work. This month we learned that 160,000 people have become homeless in the SF Bay Area both before and after the pandemic, itself a catastrophe at enormous human cost. Lee’s work in this film takes up the idea of passing out cell phones to her subjects in order for them to document their own experience. Lee’s relationship with her subjects has evolved and Contested Territories presents this new work.

We introduce the work of Wendy Liang who comes from a robust history of exquisite traditional watercolor painting but who recently cracked open her practice in tandem to the effects of the pandemic and racial injustice. Liang has finely honed abilities to render imagery entirely in the tradition of watercolor realism, after her experience engaging in a recent MFA program Liang have begun to move her practice into contested territories depicting the anxiety of the pandemic, and pan Asian identities and abstraction edging on environmental consequences. Wendy Liang is an example of the seismic shift experienced by all during this period in history.

Contested Territories both as a genre and a singular exhibition captures the essence of conflict with the joy of cultural effervescence to wander across borders both in the mind and on the ground. 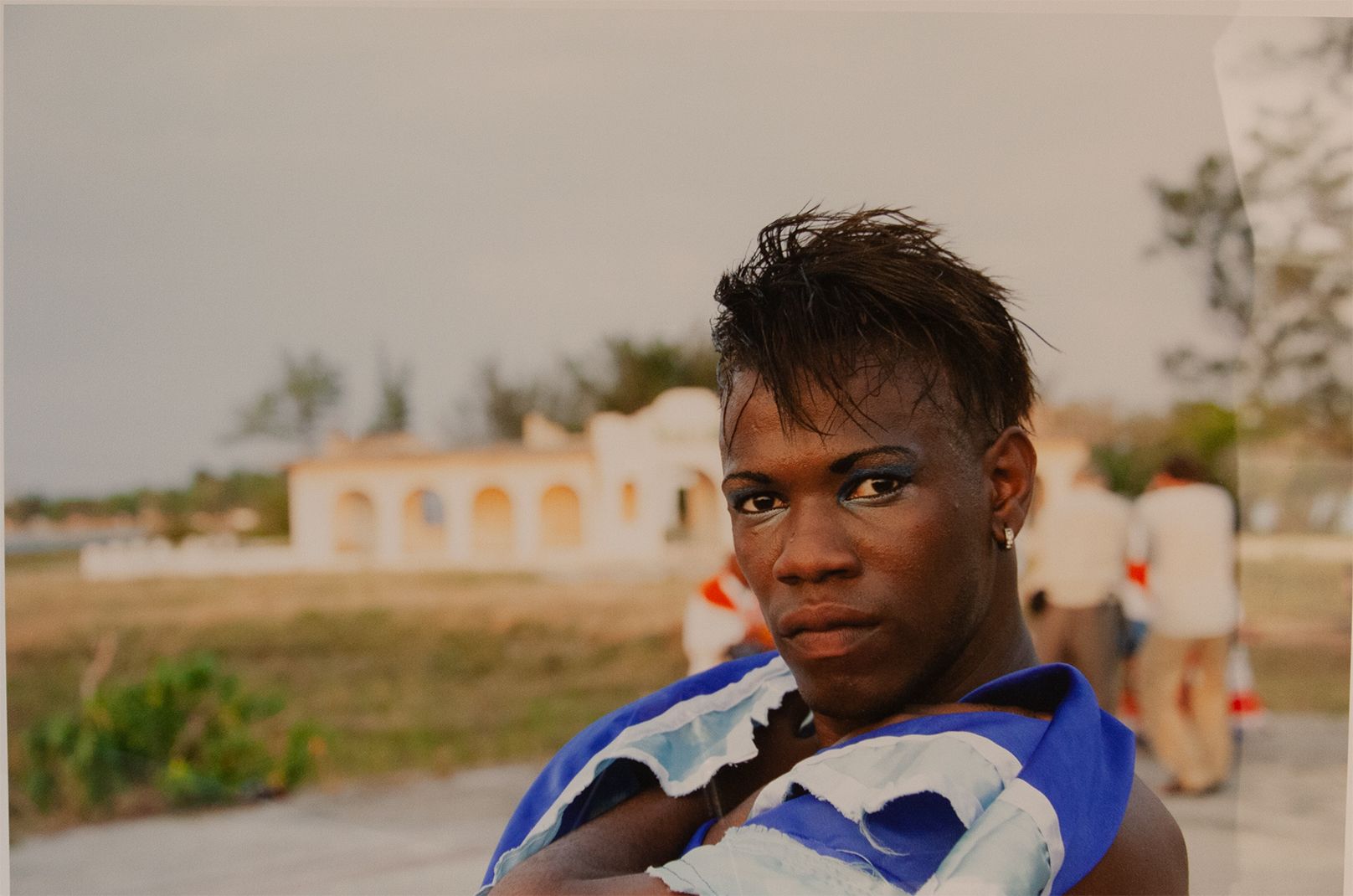 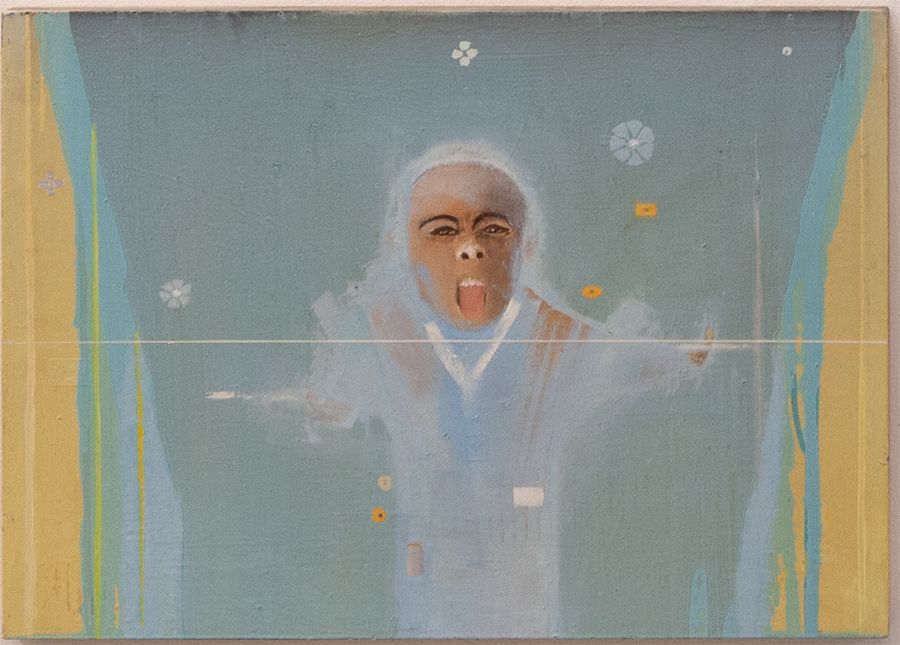 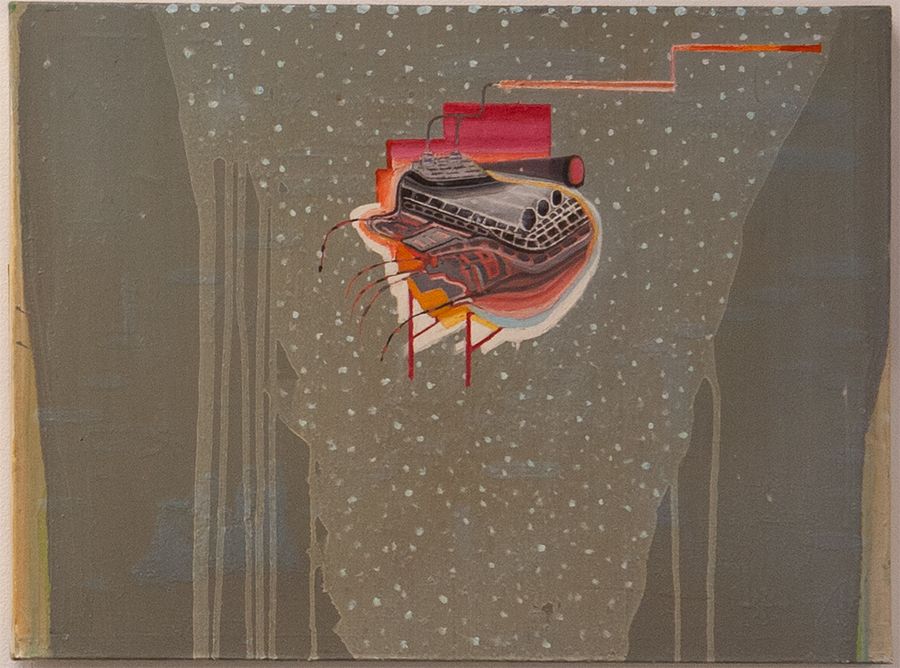 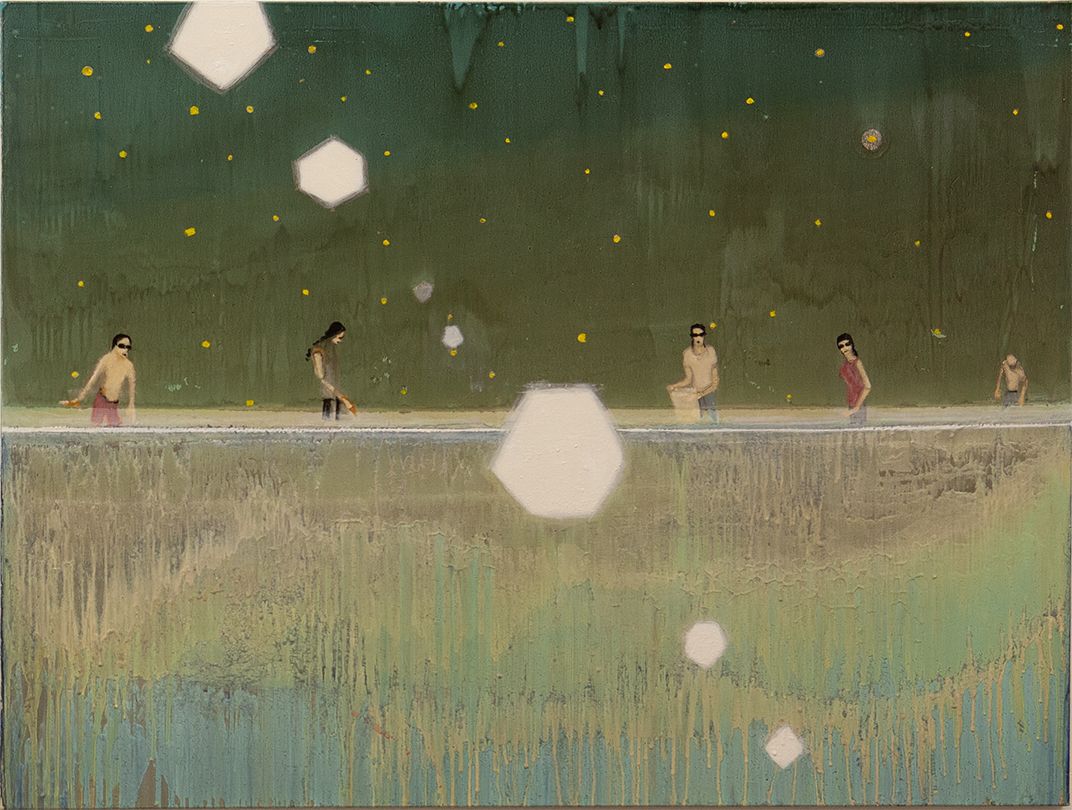 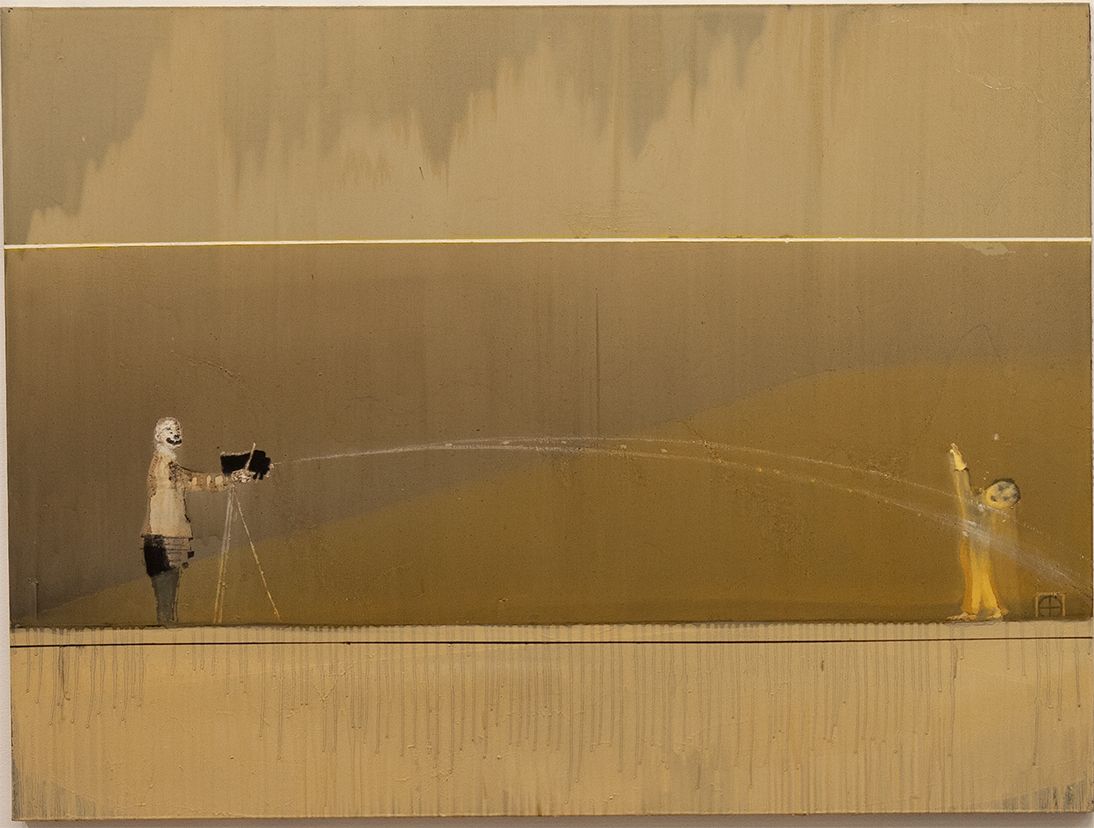 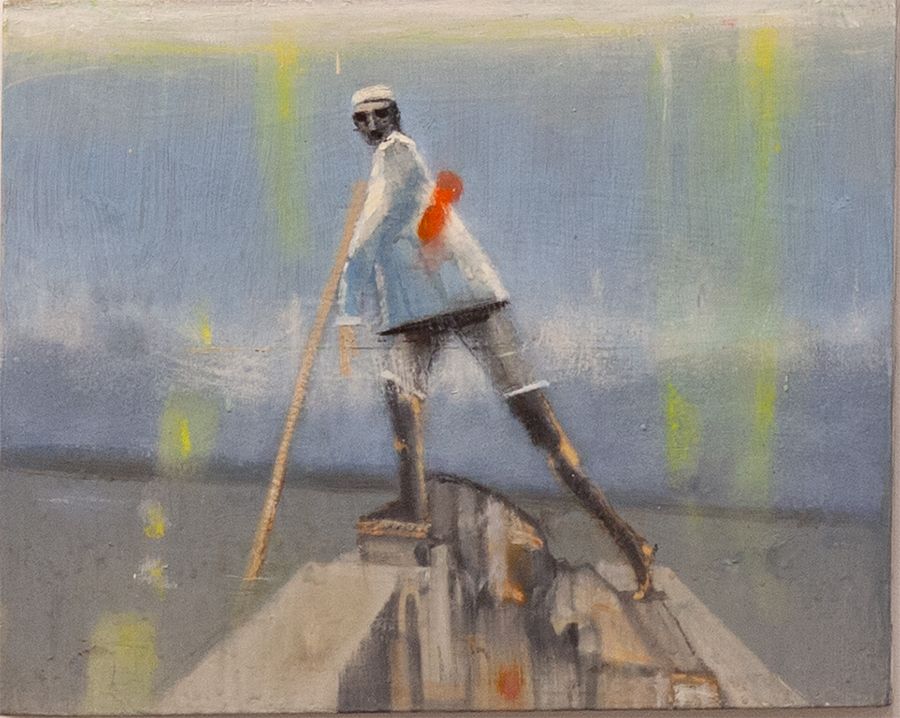 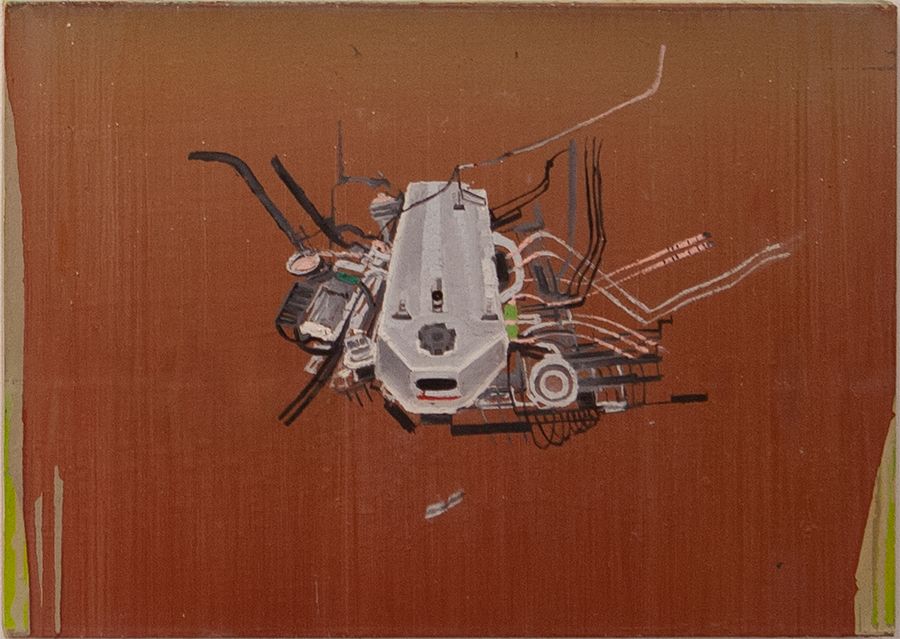 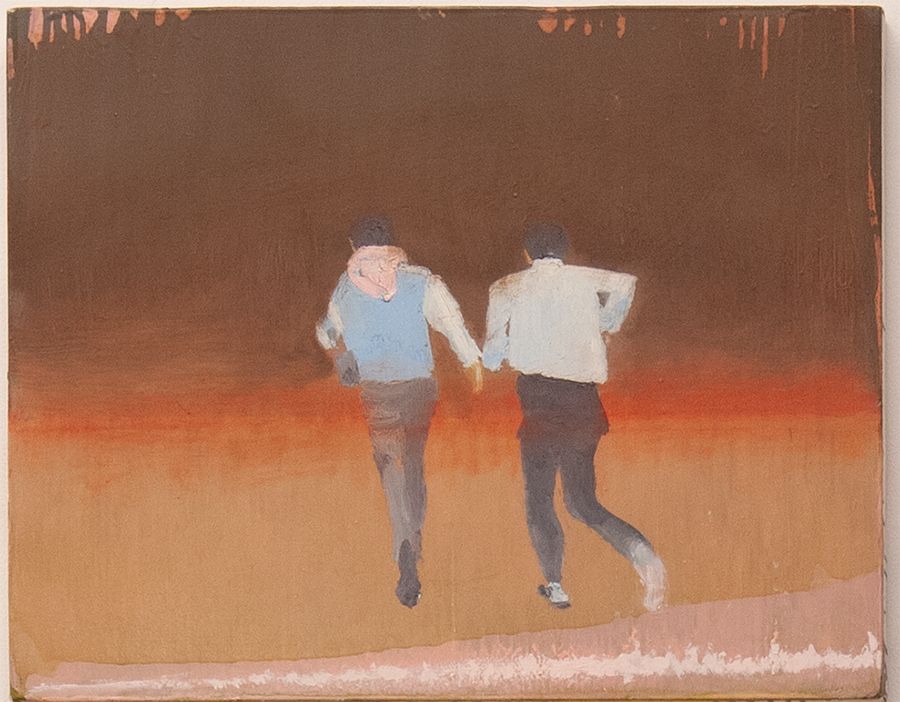 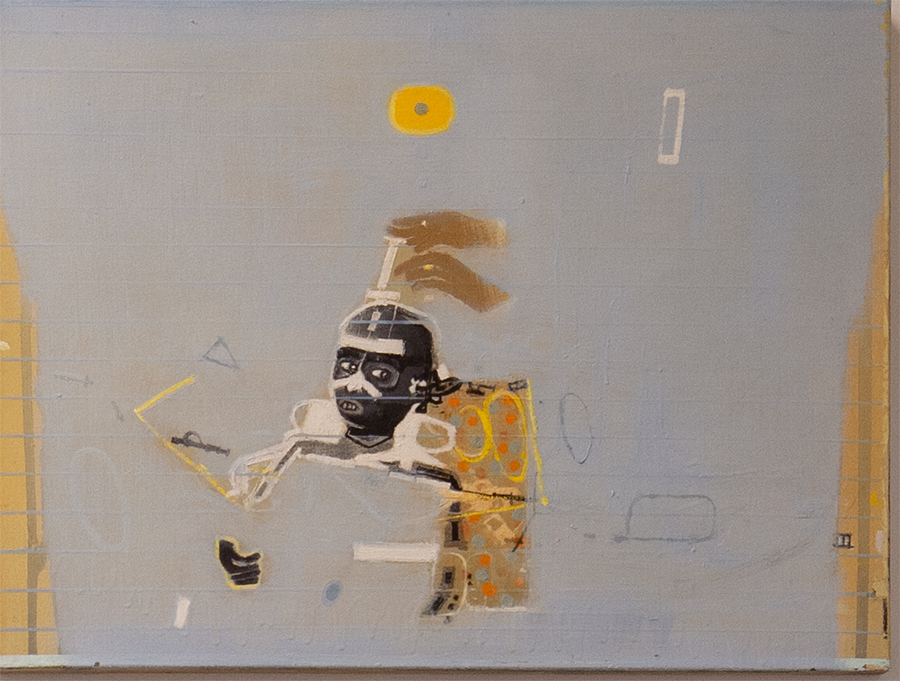 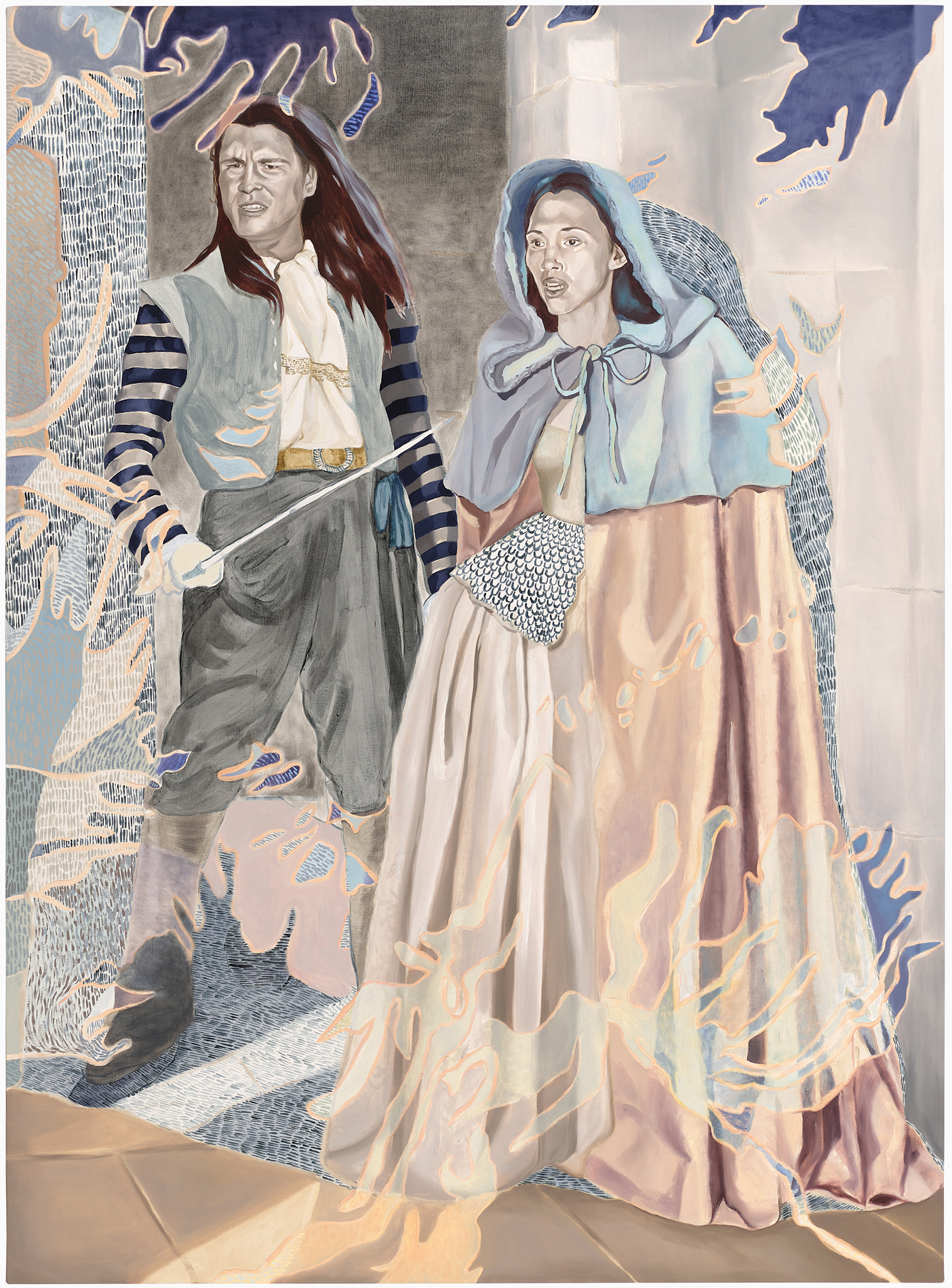 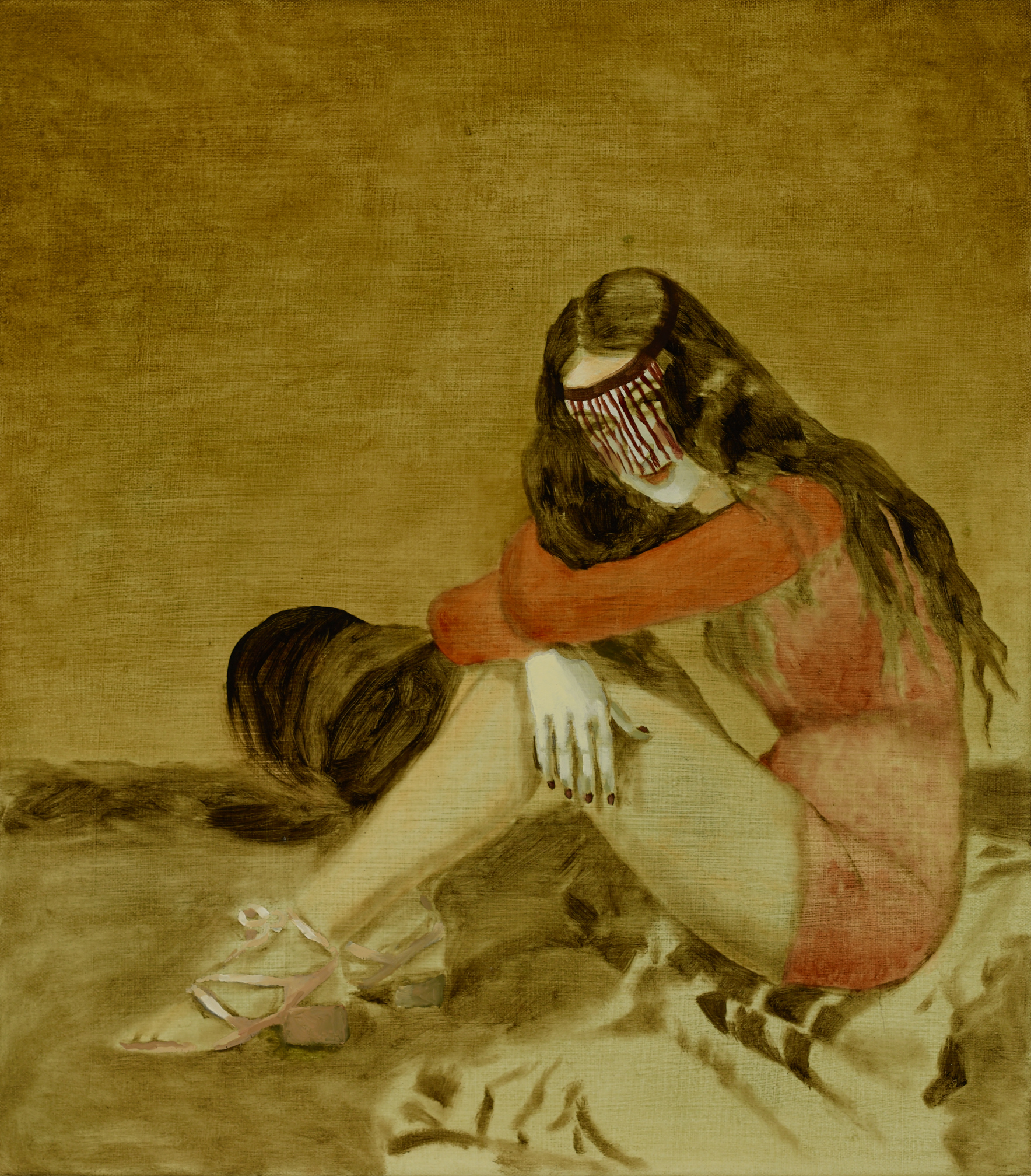 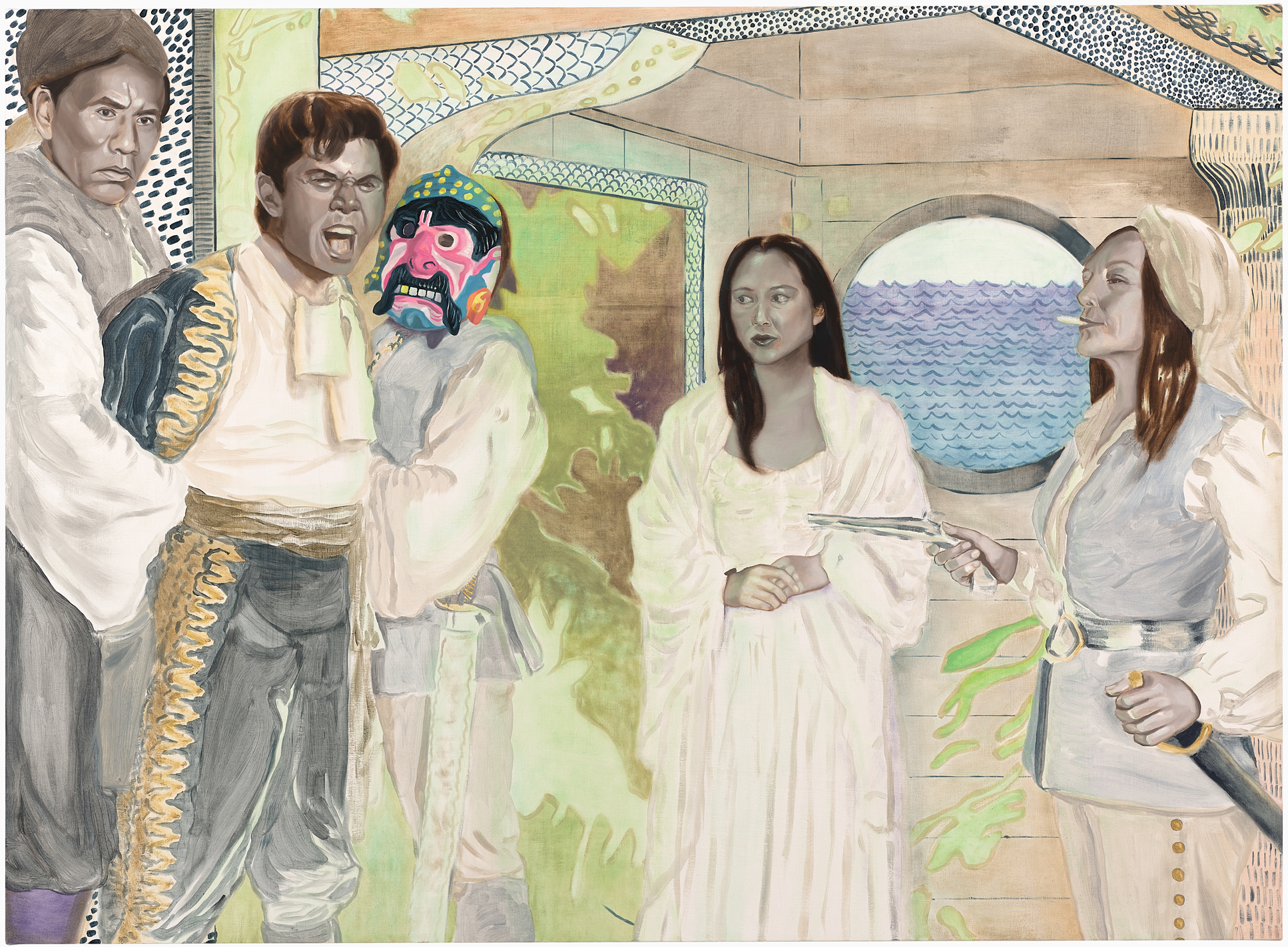 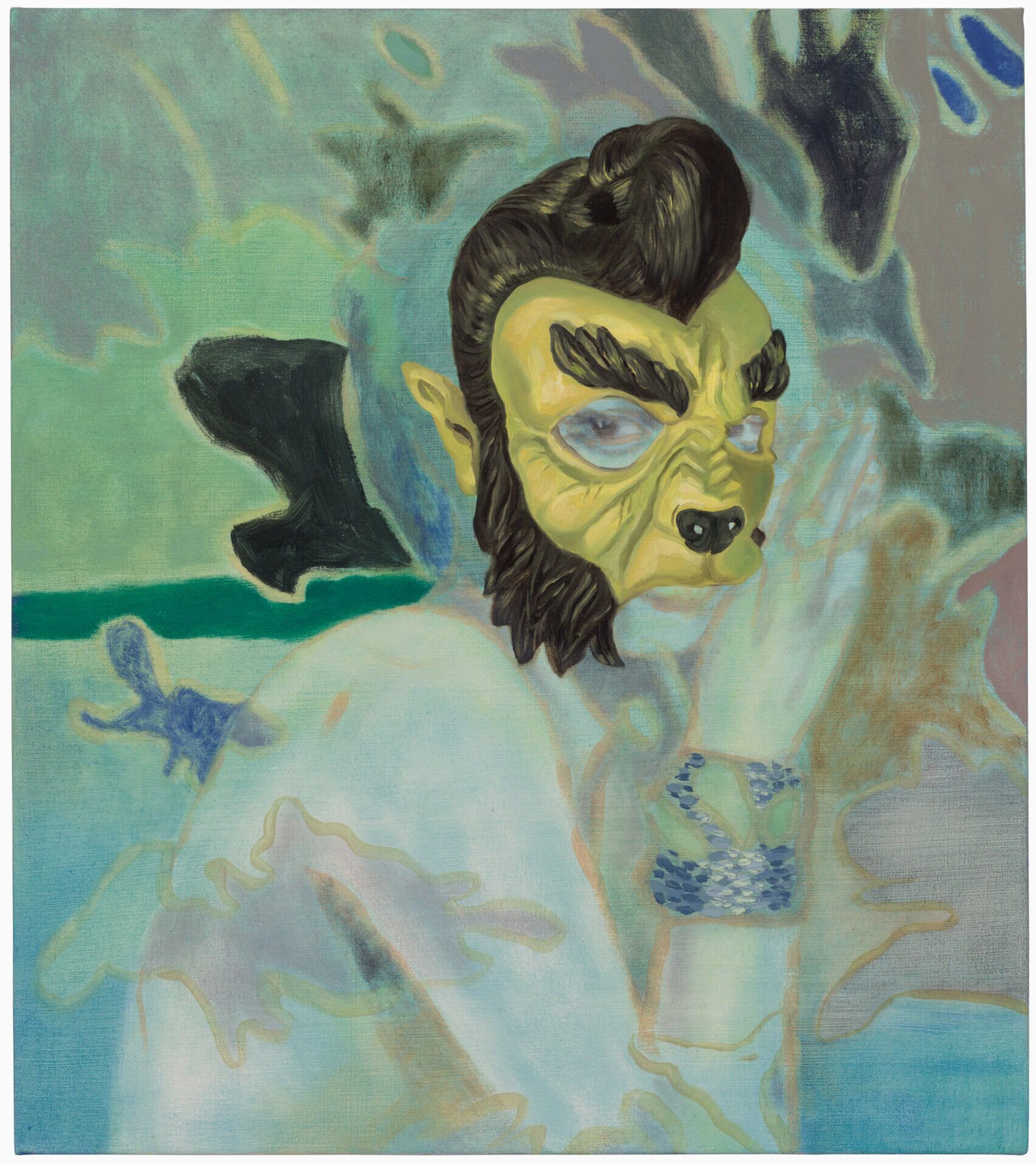 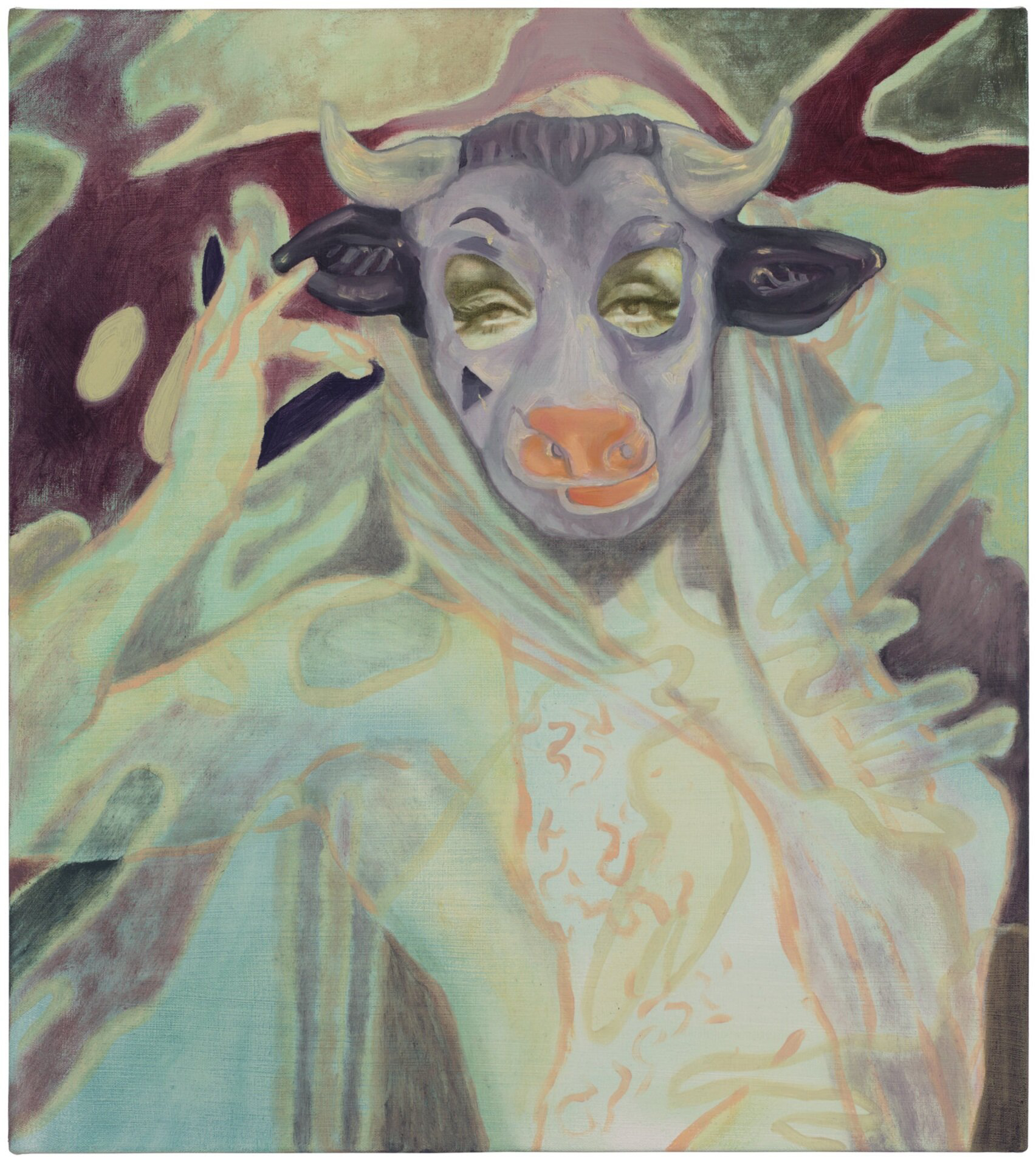 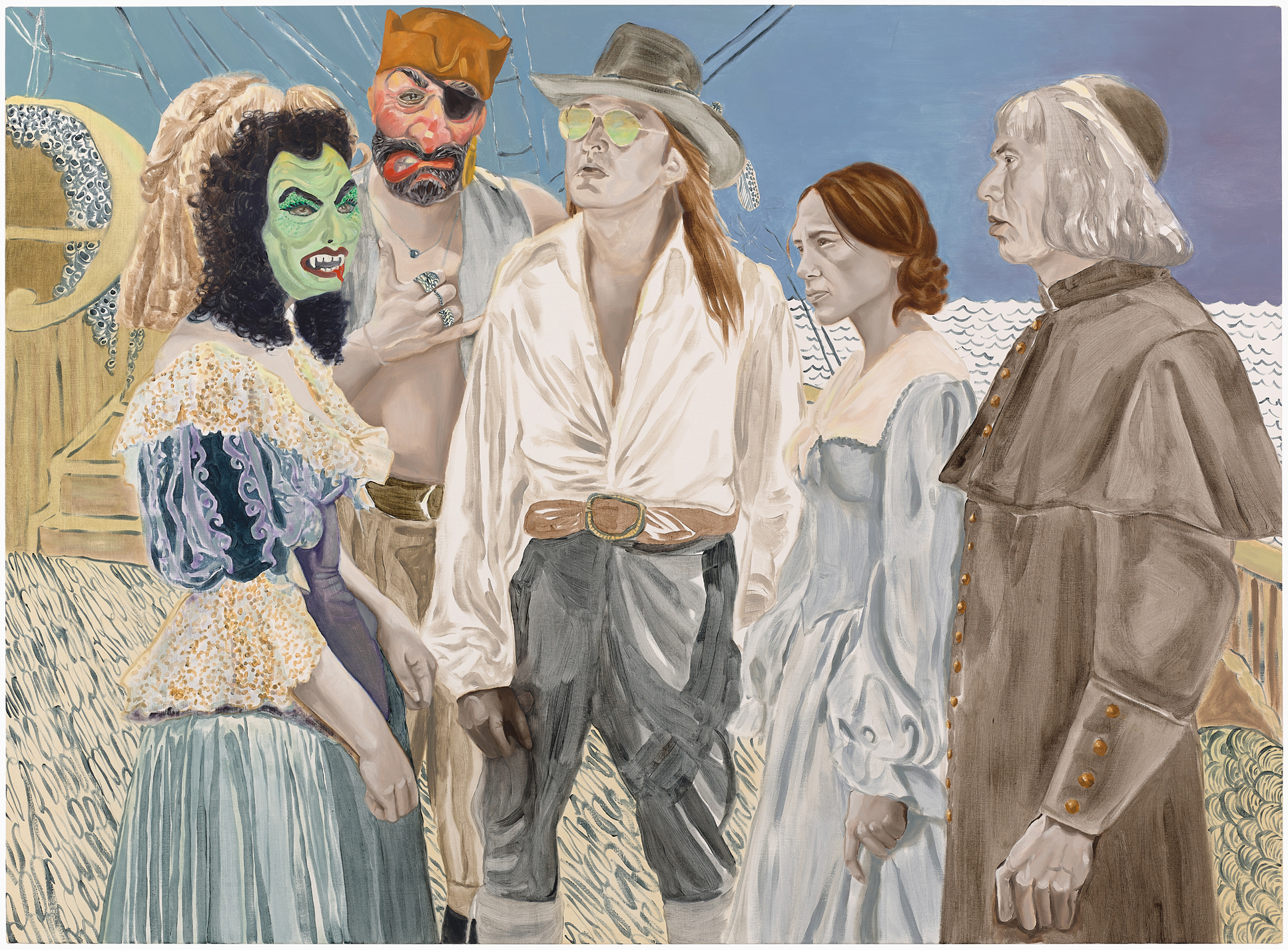 Katie Dorame
Stow Away Voyage-Graham, Irene, Wes & the Rest
2017
oil and acrylic on canvas
44h x 60w in
Photography by 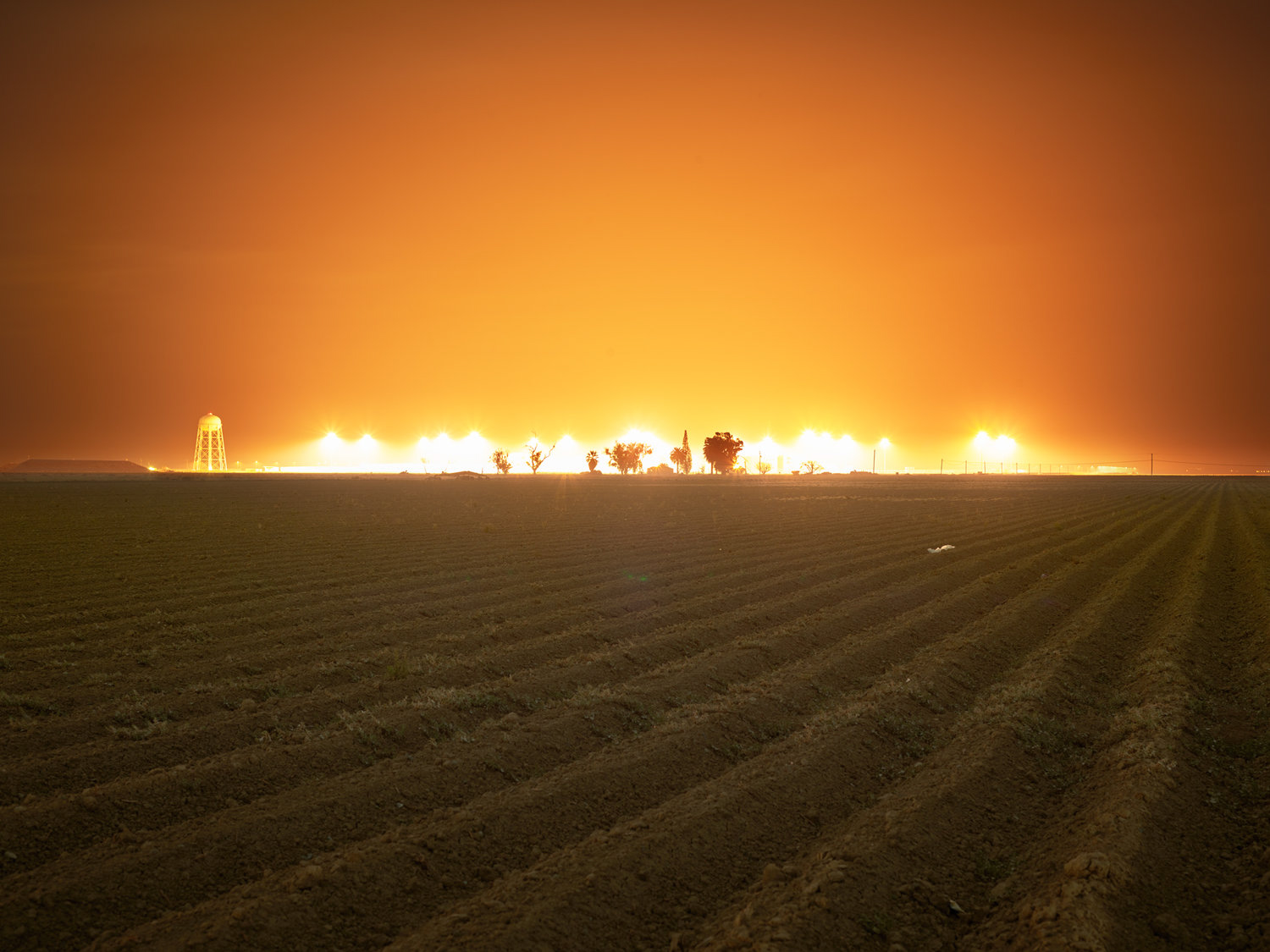 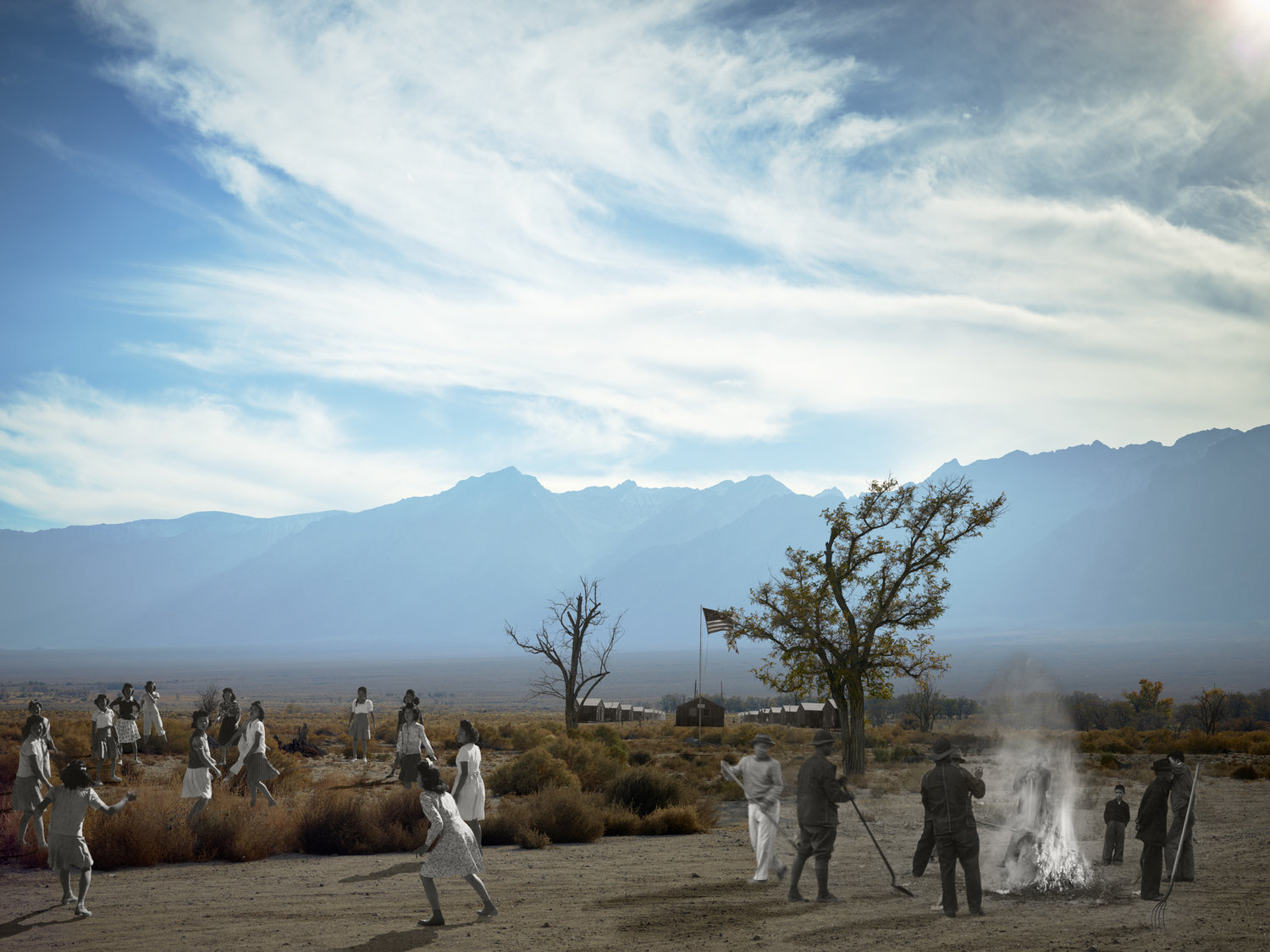 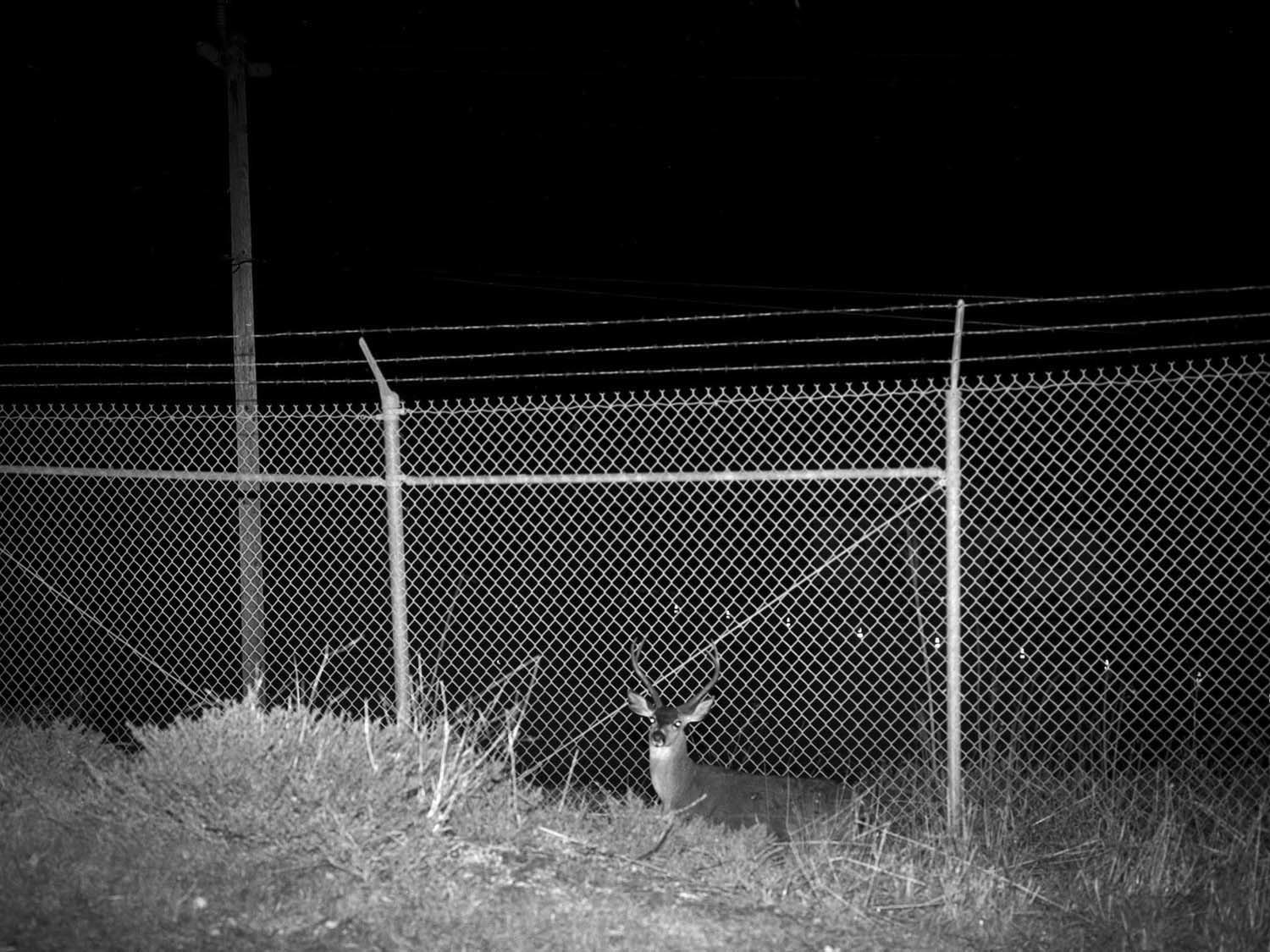 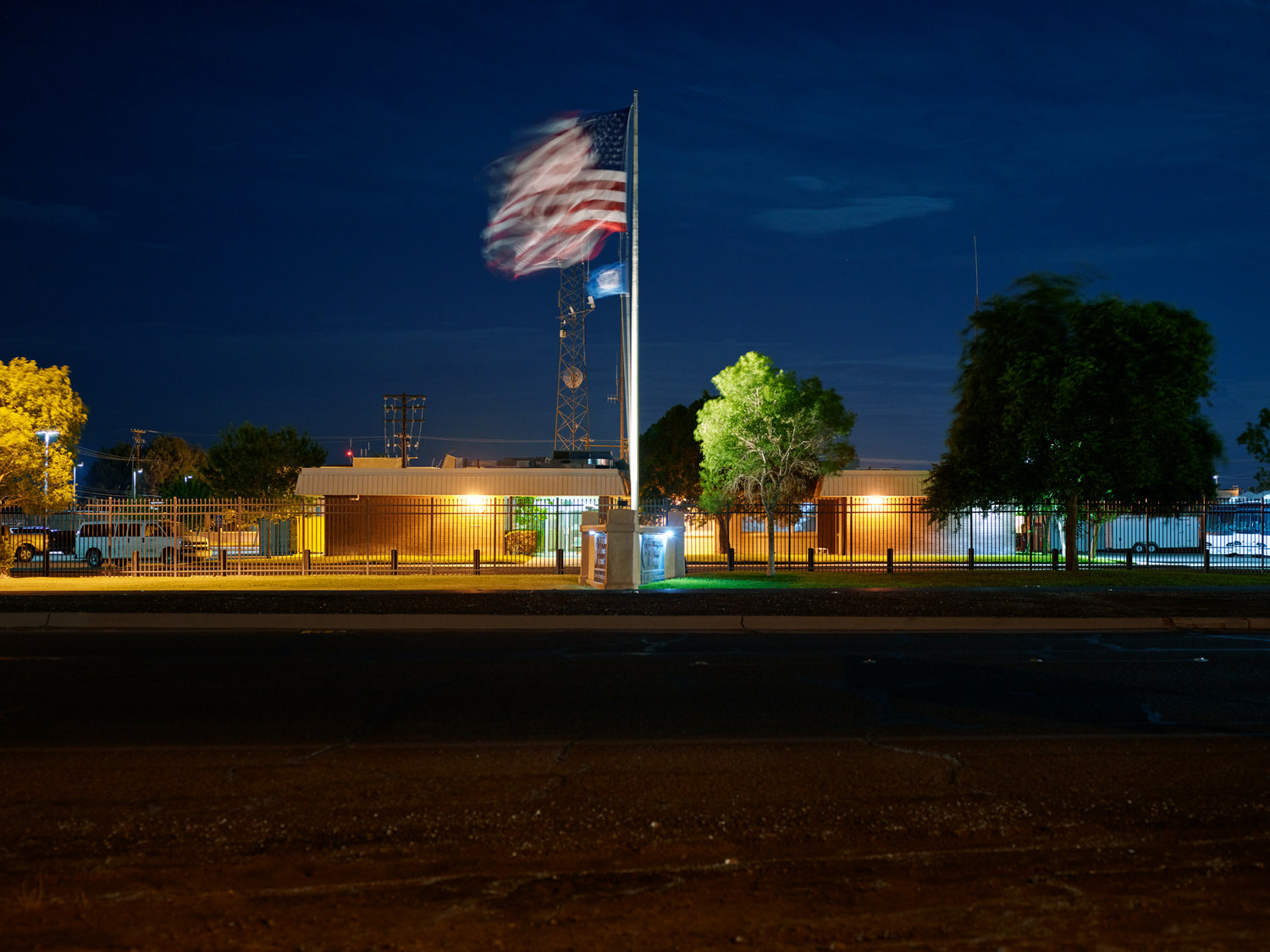 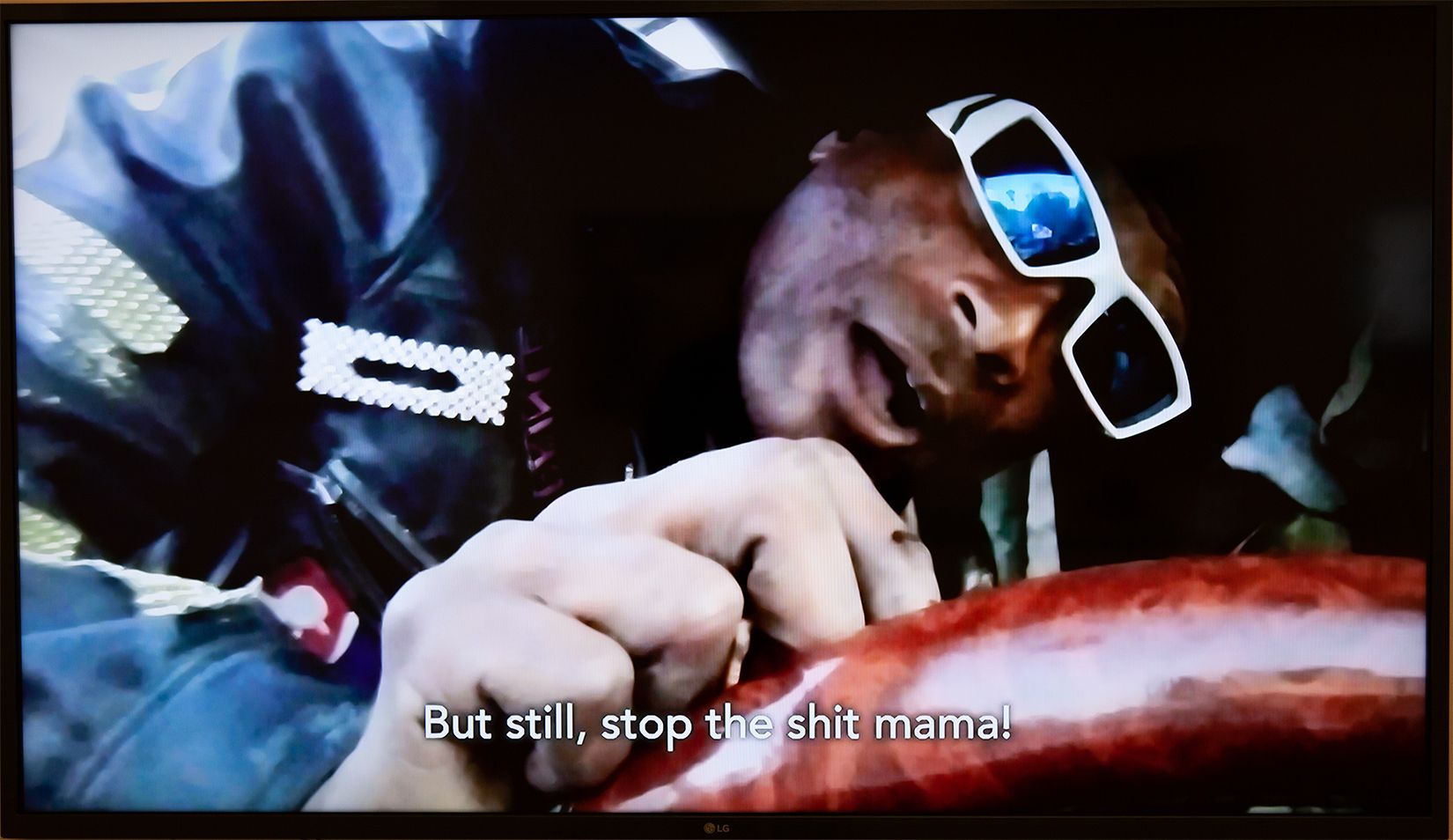 Kyung Lee
We Are Here
2021
Film in production
Photography by 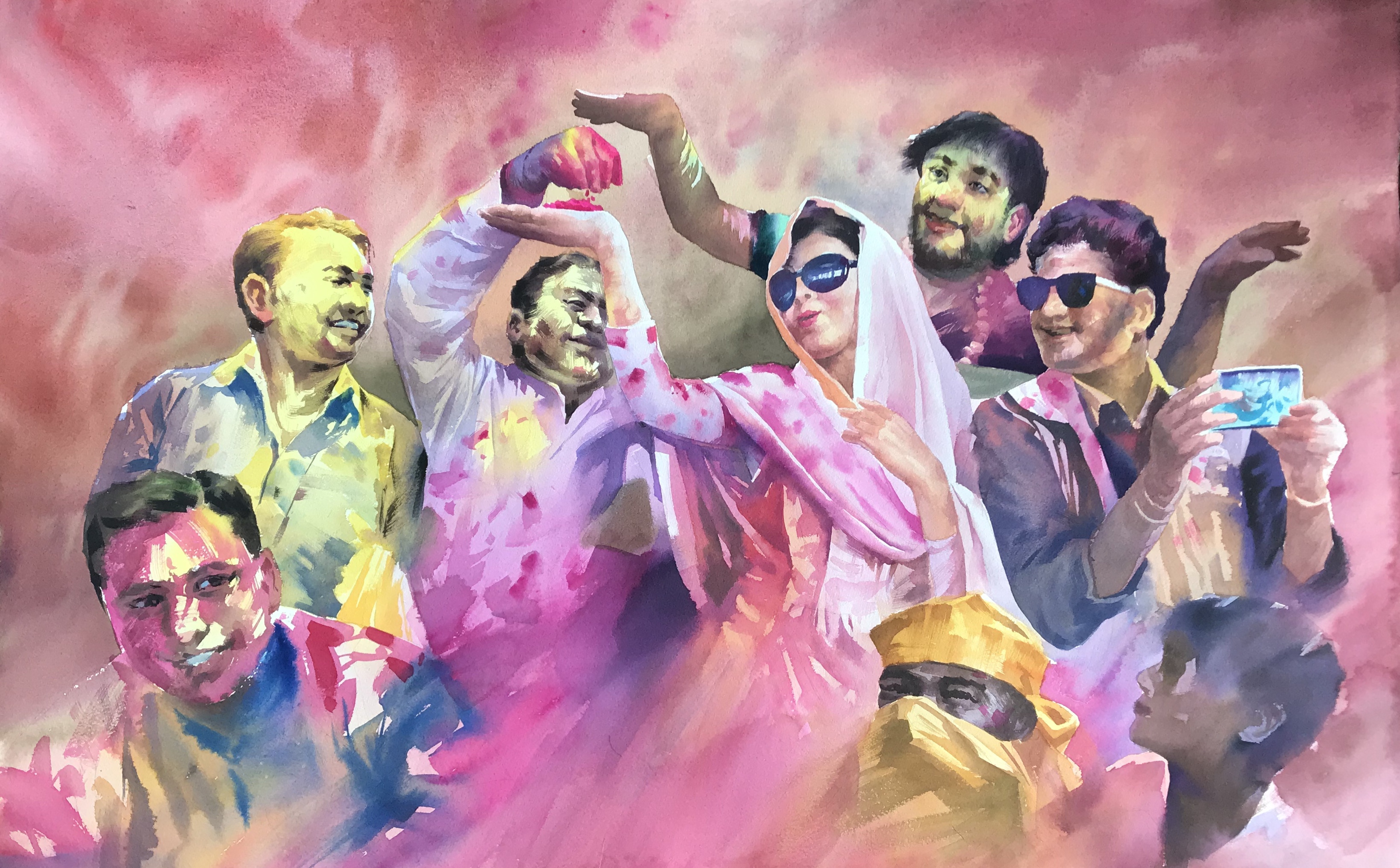 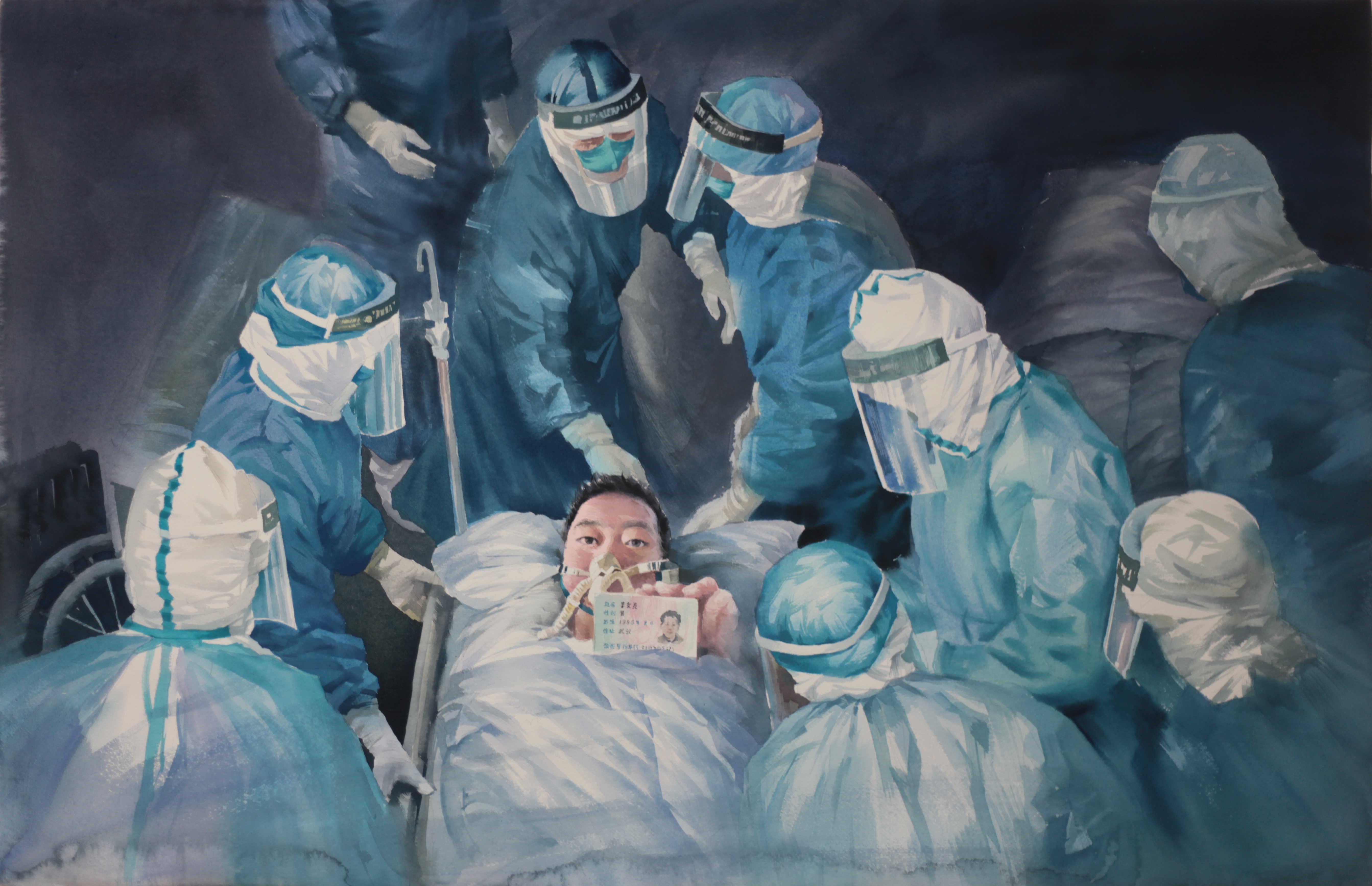 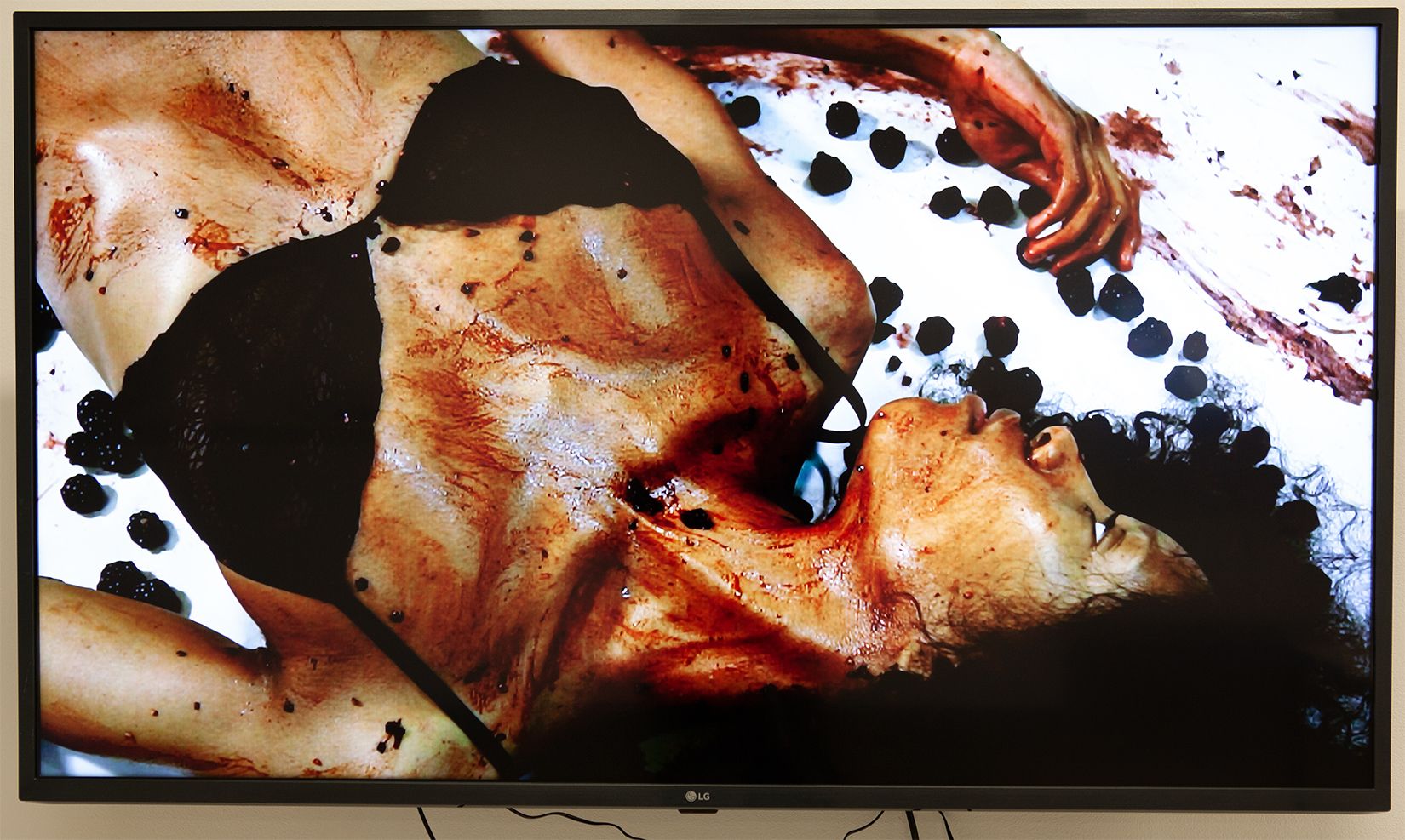